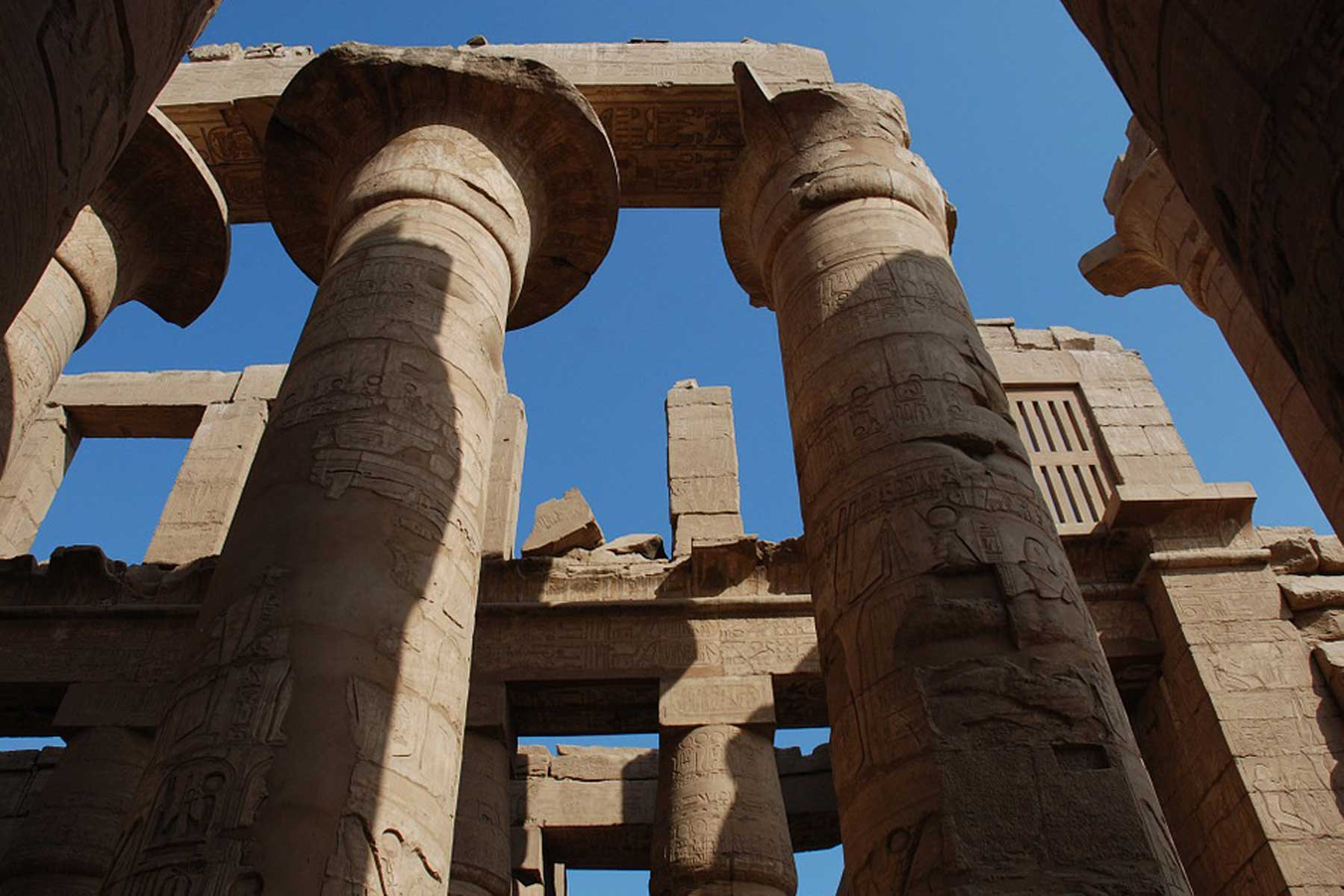 Karnak temple complex of Upper Egypt, located on the east bank of the Nile. Together with Luxor, it was part of the religious center of Thebes, the seat of the dynastic god Amun and the burial area chosen by the sovereigns. There are still impressive remains of the great Thebes complexes. These are monumental buildings begun under the 18th dynasty, to which temples and other buildings were added until the Ptolemaic Age. The main temples of Karnak . are dedicated to Amon-Ra, Khonsu, Mut, and Montu.

Who built the Karnak temple

Karnak temple was built by Amenhotep I to Thutmose I to Hatshepsut, the rulers of the 18th dynasty inserted buildings and precious obelisks, lengthening the entrance ways, but it was Thutmose III who
deeply innovated the temple complex. Later, other sovereigns, such as Amenhotep III, Akhenaten, Sethi I and Ramesses II, provided for further enlargements and embellishments of the sacred area.
Karnak temple hypostyle hall Above all, the Karnak temple hypostyle hall stands out where 134 elegant columns, with papyrus- shaped capitals, stand out thickly against the sky and support a partial roof made up of enormous monolithic slabs. Powerful columns decorated with inscriptions and reliefs that emphasize the glory of the great Ramses II, who completed the construction begun by his father Seti I.

The Great Temple of Amon – Karnak and the Temple of Luxor stand out in the majestic temple complex of Karnak. One of the most solemn and celebrated sites in the country. Since the 12th dynasty,
illustrious pharaohs contributed to the construction of the monumental complex over 1600 years, enhancing it and leaving an indelible trace of its magnificence.
The Great Temple of Karnak is consecrated to the divine triad of the god Amon, his wife Mut and his son Khonsu. A succession of imposing pillars, obelisks, statues, courtyards, and vestibules lead to the sanctuary, the spiritual heart of the temple, with the Naos that housed the statue of the god Amun and the sacred boat, used to lead the deity in procession along the waters of the Nile. Near the sacred lake, there is the statue of the Khepri beetle, which represents the Sun as it rises, the symbol of rebirth from the afterlife. Considered sacred, still today the tradition of making a few laps around the giant statue to receive luck, love, and fertility is respected.
The temple was connected to that of Luxor by Sphinx Avenue. Currently, a portion of the beautiful work is present in front of the entrance of the Great Temple of Amon, where 40 stone sphinxes, with the head of a ram and the body of a lion, are placed to an eternal guard of the extraordinary Egyptian place of worship.
The construction of the Temple of Luxor was begun by Pharaoh Amenhotep III of the 18th dynasty. Several sovereigns enlarged and embellished it, but it was Ramses II who completed it, enriching it with important architectural works. To welcome you, at the entrance, there are two statues of the mythical pharaoh together with a magnificent granite obelisk. Also dedicated to the god Amon, the sanctuary guarded the divine statue and was intended to receive the sacred boat, which carried the image of the god along the Nile, from the Great Temple of Karnak, during the annual feast of Opet.
The temple complex of Karnak is the expression of high artistic refinement and admiring its incredible beauty, one can grasp the prestige and power of Egypt during the New Kingdom.