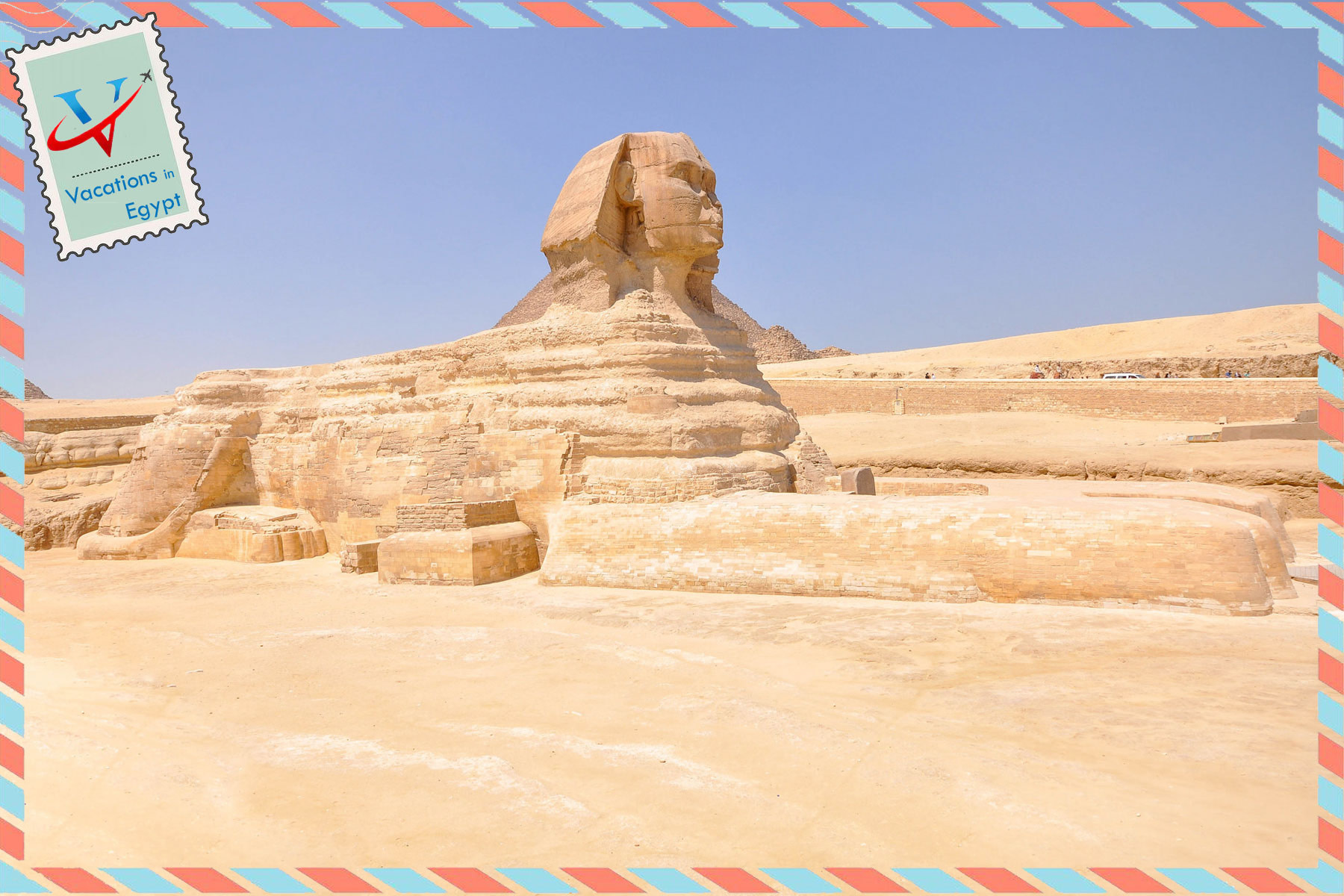 Facts about the great sphinx of Giza

More than 50 meters long and nearly 20 meters high, sphinx of Giza is one of the most emblematic monuments of Egypt. This sculpture is surrounded by mystery and beauty, something with which it has coexisted for some centuries, making its fame spread all over the world. Do you want to know when and how the Great Sphinx of Giza was built?

Where is the great sphinx of Giza located?

Before we start to tell the history of this monument, it is important to place it on the map. The Great Sphinx of Giza is located outside Cairo, the capital of Egypt. To be more specific, the statue is located on the west bank of the famous Nile River, on the so-called Giza Plateau, next to the Great Pyramid of Giza. The importance or beauty of this sculpture has to do with its incredible state of conservation and its particular characteristics: a lion’s body and a human head make up this enigmatic sphinx, which is part of a whole funeral complex for King Khafre.

When was the Great Sphinx of Giza built?

The Sphinx of Giza (or Giza Sphinx) was built by the 4th dynasty of ancient Egyptian civilization, which would be the 26th century BC. The sphinxes, a sculptural representation erected with the head of a human and the body of a lion, served as a symbol of the strength and wisdom of kings. A representation that mixes the beauty and the ferocity of the animal in the same place. Although today we know it as the Great Sphinx of Giza or Giza, the Egyptians called it the ‘Father of Terror, whose name in the Egyptian language meant ‘the guardian’.

In general, the origin of this gigantic sculpture has been the subject of debate around the world, and an endless source of myths, legends and theories. However, the construction of this element has always been attributed to Khafre, who was the fourth pharaoh during the fourth dynasty, around 2,500 B.C., who also built the pyramid that now bears his name, the burial temple and a roadway leading from the pyramid to the temple. Some authors believe that this work was done by King Cheops, who built the Great Pyramid.

The purpose of the construction of this monument was purely funerary. That is to say, it was built as part of a complex formed by other monuments, with the function of protecting the pyramid of King Khafre. For this reason, it is located “in front” of this complex, composed by the temple and the road we have talked about before. It is believed that the head of the sphinx could represent the very Khafre.

How was the Sphinx of Giza built?

One of the most typical questions, when we talk about this type of monument, is, how was it built? The Great Sphinx of Giza was built by sculpting a limestone mound on the plateau where it is located. One of the curiosities that this Sphinx offers is that it has 3 different types of rock: the head is the hardest material, which has allowed its conservation over the years. On the other hand, the conservation of the body is not due to the material of which it is made, but to the fact that it spent many years buried under the sand.

What happened to the sphinx nose?

Curiosities of the Great Sphinx, Who broke the Sphinx nose? One of the most controversial questions over the years, and one that has long been the subject of intrigue, is undoubtedly the whereabouts of the Sphinx’s nose. For many years there was speculation that it was Napoleon Bonaparte who ordered the nose of the Great Sphinx of Giza to be destroyed. However, the paintings of Frederic Louis Norden made in 1738 refute this theory, as the No-Nose Sphinx is depicted 31 years before Bonaparte’s birth.

Another story about the sphinx’s nose comes from an Arab historian who attributes the destruction of the nose to a Sufi Muslim who, upon seeing the offerings made by some peasants to the Sphinx of Giza to improve their crops, decided to destroy this monument starting with the nose, but was hanged, so he could not knock down any other part.

Without a doubt, the destruction of Nose Sphinx remains a mystery to many, as does all the history surrounding this gigantic monument. What we do know is that this is one of the star monuments, capturing all the glances of the tourists who visit the pyramids of Egypt at the gates of the desert. In fact, even some theories claim that the Great Sphinx of Giza could have been the work of the people of the theoretical underwater city of Atlantis. But of course, there is no scientific evidence on which to base such theories, so we will have to keep investigating to find out more about this valuable monument.